In March 2008, incidence of heel ulcers in a 500-bed acute care facility was 6%, roughly three times the national average.1,2,3,4 Interventions to prevent pressure ulcers included the use of multi-podus boots and pillows. The facility’s Systems Coordinator, who is a CWOCN and the facility’s representative of the hospital system’s SMART team, began an extensive search for a device that could assist the hospital in achieving better outcomes. She tried multiple products, including the industry’s leading heel protector. Lamentably, she found herself able to “wiggle out” of everyone. One company even attempted about 10 different iterations of prototypes. None were able to stay in place reliably.

Finally, the principal investigator worked with a local company to develop a heel protector that would stay in place.

After institution of the intervention, the facility’s heel ulcer rate declined rapidly and steadily. The facility has maintained a zero nosocomial heel ulcer rate since 2009. Keys to driving heel ulcers to zero – and maintaining a zero rate – include (1) instituting an evidence-based protocol, (2) encapsulating the protocol into the hospital’s EMR to alert nurses automatically when the intervention is needed, and (3) selecting a heel protection device that stays in place even with extreme patient movement. 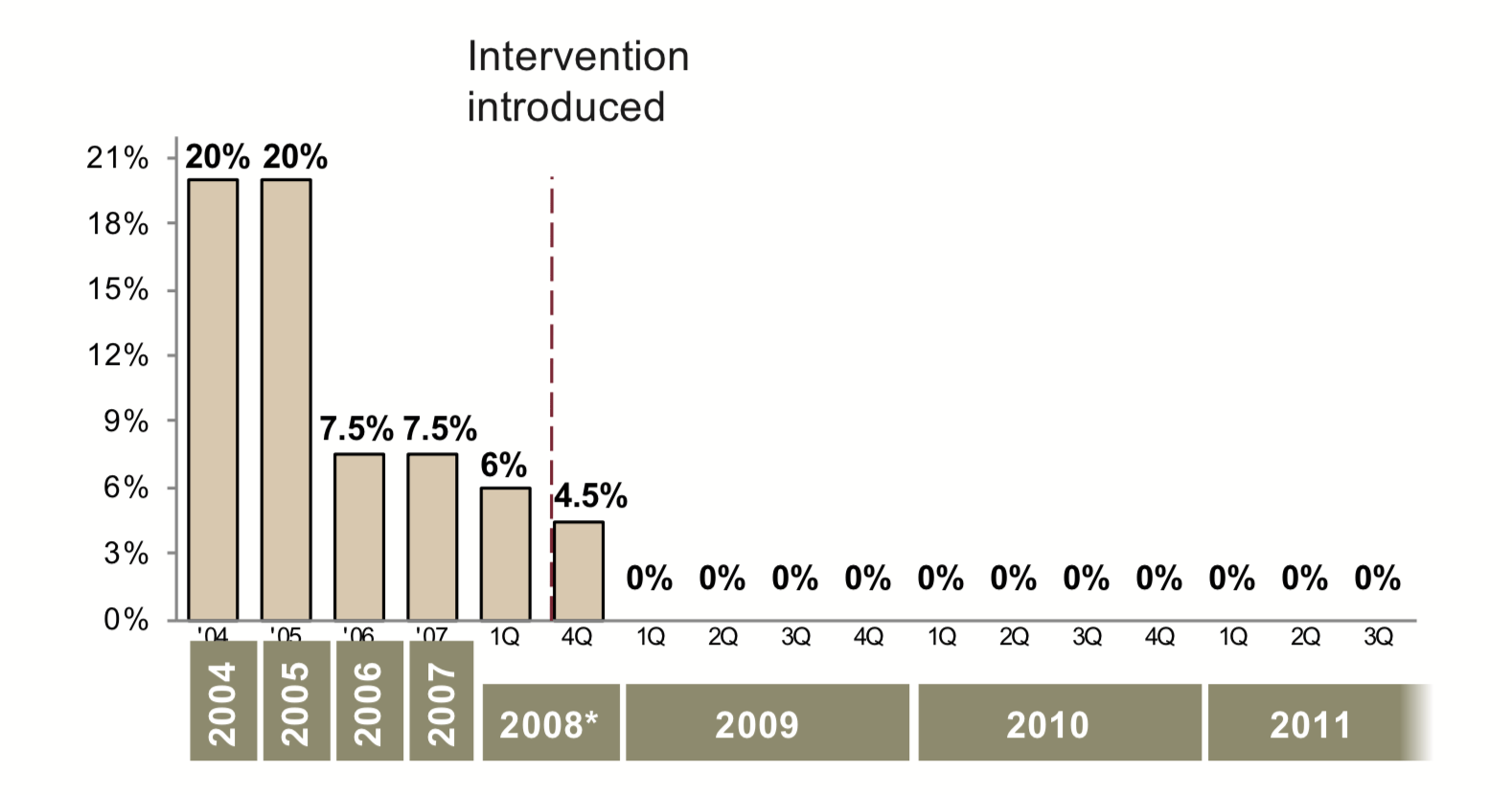 * Note: Quarterly prevalence and incidence measurements began in the fourth quarter of 2008.

A literature review identified the following co-morbidities as being associated with the development of heel ulcers: immobility, diabetes; peripheral vascular disease; hypotension, or reduced perfusion to lower extremities; vasopressors; and smoking. The 2009 NPUAP Guidelines4 call for offloading the heels of patients with or at risk for heel pressure ulcers. These risk factors and interventions were synthesized into a formal protocol.

The principal investigator began an extensive search for a device to improve outcomes, but her tests found patients would be able to “wiggle out” of everyone. One company even attempted about 10 different iterations of prototypes. None were able to stay in place. Finally, the principal investigator worked with a local company to develop and customize a heel protector that would reliably stay put.

In March 2009, the wound care nurse implemented a multi-faceted intervention in each of the three ICUs. The intervention included development of evidence-based intervention criteria; posting the criteria in every room; extensive education of nursing staff; stocking heel flotation devices on the unit; ongoing monthly measurement of prevalence and incidence; and active oversight by a committed wound-care professional.

During the 12-month period following the intervention, from March 2009 through February 2010, heel ulcers were reduced by 65%, to 0.43 per thousand patient days, saving the facility $44,000 annually in expected treatment costs.

The implication is that continued success of intervention – even a rigorous, multi-faceted one – often requires the continued oversight of a committed wound care professional. Clearly, even better staff education and accountability are desired, so that the process is not dependent upon the daily presence of a single individual. 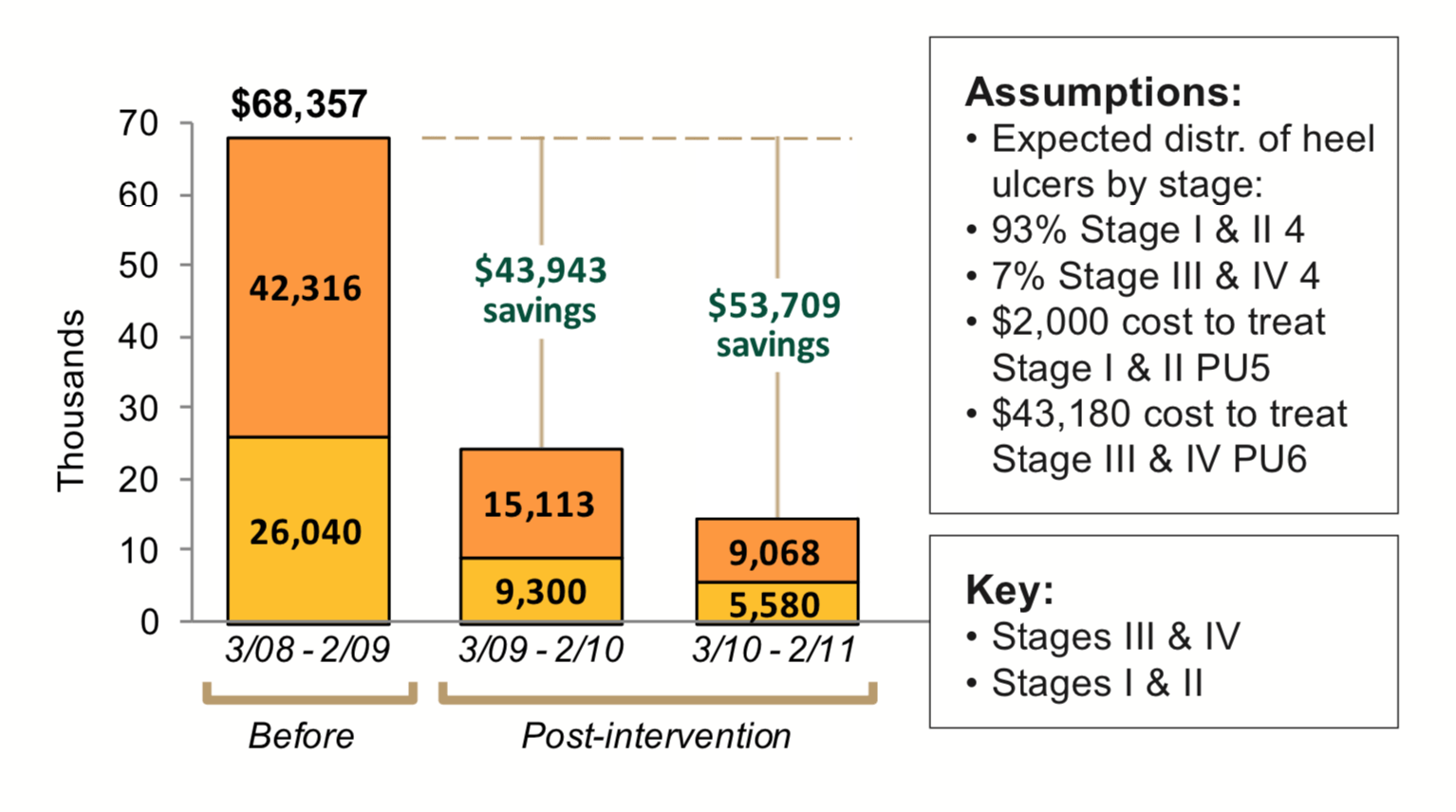 BUILDING BLOCKS OF A SUCCESSFUL INTERVENTION

Post criteria in every room enables clinicians to be visually reminded of the criteria when attending to every ICU patient.
3

Ensures all nursing staff, both initially and when new staff are hired or assigned to ICUs, are trained.
4

This is key to ensure that staff understand and are following the intervention, especially at the beginning.
6

Stock on the unit was found to be a key to compliance during weekend shifts, when orthopedic support is not present in the hospital.